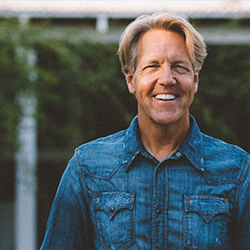 Skip Heitzig is a native of southern California, and experienced the volatile days of the counter-culture in the late 60s and early 70s. Though raised in a religious home, Skip saw religion as a dead-end street with no answers. As a teenager, he got caught up in drugs and ventured into the occult. But God reached Skip one day in 1973 as he was watching a Billy Graham crusade on TV. The Gospel message penetrated his soul and he knelt and prayed to receive Christ.
Skip studied under Chuck Smith at Calvary Chapel of Costa Mesa, California, until 1981. After he married Lenya, the couple moved to Albuquerque, New Mexico, where he worked in the medical field of radiology. In 1982, Skip began a home Bible study which eventually grew into Calvary Albuquerque. In 1988 and 1989, Calvary Albuquerque was considered the fastest growing church in America. Today, Calvary Albuquerque ministers to over 14,000 people every weekend. Several other churches have spun off from Calvary Albuquerque, including churches in Arizona, Colorado, and other parts of New Mexico.
Skip reaches out to thousands across the nation and throughout the world through his multi-media ministry, including a nationwide half-hour radio program, The Connection.
Skip also helps equip others for living according to God’s principles through his writings. Some of his recent books include The Daily God Book, Church? Who Needs It, and How to Study the Bible and Enjoy It (revised). He also publishes over two dozen booklets in the Lifestyle Series, covering aspects of Christian living.
Skip holds a B.A., M.A. and Doctor of Divinity, and a Ph.D. in Philosophy Biblical and Theological Studies from Trinity Southwest University. He has been awarded a doctor honoris causa from GFA Biblical Seminary. He currently serves on several Boards of Directors, including Samaritan’s Purse.
Son Nathan and daughter-in-law Janaé made Skip and Lenya the proud grandparents of Seth Nathaniel and Kaydence Joy.

As we continue to broadcast in the beautiful city of San Angelo, we invite you to take part with us! Listen and tell everyone you know about 98.1 The Word! And join us financially as the Lord guides you!