THE WORD TO STAND ON – RON ARBAUGH

The Word To Stand On – Ron Arbaugh 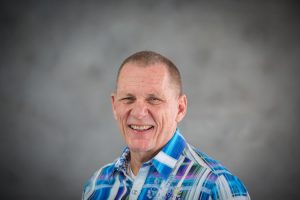 Pastor Ron spent the first 39 years of his life running away from Jesus Christ. Finally, on February 17, 1991, while running away from home because of the shame of admitting his sins to his wife and 2 children (Ronnie & Terry), he fell to his knees on a public street in Upland, California. From that day forward, his life has never been the same!

Ron grew up in Southern California in a middle-class home in the late ’60s and early ’70s, when the hippie culture was booming. While in college, Ron met his wife, Paula. They were married on September 16, 1972. With the added responsibility of marriage and his first son on the way, Ron found his first full-time job selling cars and quickly became successful. This led to a 21-year career in the automobile industry, which culminated in Ron’s partial ownership of a Nissan dealership in Ontario, California.

In 1988, Ron’s grandmother and mother, both believers, passed away. That was followed by the loss of his business as a result of gambling. After losing his fortune, Ron’s family was evicted from their home. This was during his youngest son’s senior year in high school. Finally, without hope, Ron tried to run away. God is so gracious; Ron was only able to get a block away when the power of the Holy Spirit dropped him to the ground. He didn’t know anything about Jesus, except that his wife, who had been praying for him for 13 years, found joy during the years Ron made her life a living hell. He cried out for the Jesus Paula knew! That was the beginning of a beautiful relationship with God!

Calvary Chapel of San Antonio began when God spoke to Ron’s heart on March 4, 1994, saying, “Begin to pray for the people of San Antonio.” Although he and Paula had never been to Texas, never wanted to go to Texas, and knew no one in Texas, God’s call was unmistakable. After graduating from Calvary Chapel Bible College, Ron, Paula, and their 14-year old dog, Moto, headed for Texas in a truck that cost $1. The first home Bible study took place on May 31, 1995.

Our ministry has now expanded in ways which can only be described as miraculous. South Texas is responding to simple, verse-by-verse Bible teaching by falling more in love with Jesus every day!